My (not so formal) formal disclosure: the following represents the opinion of a second-year family practice resident, fitness enthusiast, and nutrition dabbler…namely, myself.

“Diet” is defined as, “…the kinds of food that a person, animal, or community habitually eats”; or “…to restrict oneself to small amounts or special kinds of food in order to lose weight.” Nowhere in this definition are you told how to eat; you’re only told that dieting involves restricting food. However, how do you know what you’re supposed to restrict? Also, how can the restriction of any kind of food be completely sustainable?

This brings me to my next definition, “fad diet.” This term refers to “…a popular diet used to lose as much weight as possible in a short amount of time.” For example, some fad diets (like the South Beach Diet, the Lemon Diet, and “juice cleanses”) call for the complete elimination of entire food groups. I have a lot of issues with these fad diets! For one, the goal should never be to lose as much weight as possible, but instead to lose weight in a healthy way. Second, losing weight in a short amount of time only leads to “yo-yoing” (sudden weight loss followed by sudden weight gain).

Why do I sound like such a diet hater? Because I believe that if you’ve decided to make a commitment to your health by losing weight and eating better, then you should do yourself the favor of creating sustainable new lifestyle habits that will last a lifetime, rather than dieting for just a few weeks so that you can fit into that dress or that pair of pants. Instead of crash diets or fad diets, I recommend small, sustainable changes that will eventually evolve into lifetimes habits.

When it comes to dieting, small changes will be much more productive than the drastic changes demanded by a fad diet. For example, let’s take a diet that promises that you will “…lose 15 pounds in a week if you eat zero carbohydrates.” You may be able to do this for a few days, or until you’re tempted by cake at your best friend’s birthday party. At that point, you might think, “I can cheat with one piece of cake today, and then jump right back to my diet tomorrow!”  Unfortunately, that one piece turns into a few pieces, or you add some pizza and fries! This is a common story that I hear pretty frequently in my office. The intent to eat better and lose weight always starts off strong, when the motivation is high and there is a “newness” to the whole process. But then you start to crave what you can’t have, you want to be able to enjoy a drink or a meal with your friends, or you have a tough day at work and just need that ONE thing you’ve sworn off of to feel better. This is no way to live your best life! Instead, you’ve created a life full of deprivation, guilt, and shame.

Instead, I think you should adopt an “80/20 lifestyle.” This means that instead of eliminating something completely, you try to abstain from it 80% of the time. Then, following the rules below, you can spend the remaining 20% enjoying live and giving yourself some grace!

More generally, try to follow the following rules, which I give to all patients who are seeking out a healthier diet:

So, if it’s your best friend’s birthday, go ahead and have a piece a cake. If you keep up with the “80/20 rule,” you won’t feel like it’s “cheating,” and you’ll avoid the temptation to binge later on. For some people, the word “diet” is enough to make them feel restricted. Instead, I challenge you to create new habits and change your lifestyle rather than trying a fad diet, failing, and regaining the weight you were trying to lose. You may feel like the tortoise in the race against the hare, but who wins the race? Slow and steady. 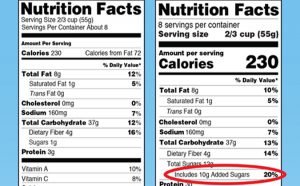 We support our residency and continuing education programs by: